Dr. Morten Scheibye-Knudsen earned his Doctor of Medicine in 2007 from Københavns Universitet where he also earned his PhD in Neurodegeneration in Accelerated Aging in 2016. Since 2008 Morten works at the National Institute on Aging at National Institute of Health in Baltimore, Maryland. His work focused on the cross-talk between DNA repair and mitochondrial function in neurodegeneration and aging. In 2013, at NIH, he became Research Fellow and in 2015, Visiting Professor. For two years, Morten lectured on the Biological Basis of Aging course for graduate students at Johns Hopkins Bloomberg School of Public Health. Currently, he manages his online companies Forsogsperson.dk and Mitodb.com and volunteers as Reviewer and Editor for multiple journals and publications. Forsøgsperson.dk recruits volunteers for basic scientific studies. With up to 100,000 hits monthly this has grown to become the largest single provider of research volunteers in Denmark. Mitodb.com was created for the scientific community to investigate possible links between clinical symptoms seen in genetic diseases and mitochondrial pathology. Morten is Assistant Professor and group leader of the Center for Healthy Aging at University of Copenhagen and editor of Journal of Gerontology & Geriatric Medicine. 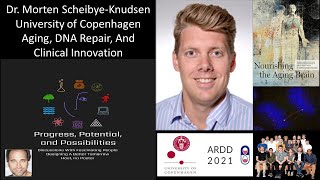 Dr. Scheibye-Knudsen did his MD at the University of Copenhagen and worked briefly as a physician in Denmark and Greenland before turning to science. He did his post-doctoral fellowship at Vilhelm Bohr’s lab at the National Institute on Aging, National Institutes of Health, USA, where he utilized state-of-the art approaches to understand how DNA damage contributes to aging, discovering that neurodegeneration in several premature aging diseases is partly caused by hyperactivation of a DNA damage responsive enzyme called polyADP-ribose polymerase 1 (PARP1). This activation leads to loss of vital metabolites such as Nicotinamide Adenine Dinucleotide (NAD+) and acetyl-CoA. Importantly, this discovery facilitated the realization that we can intervene in the aging process by inhibiting PARP1, augmenting NAD+ levels and increasing acetyl-CoA. In his own lab Dr. Scheibye-Knudsen continues to focus on understanding aging by combining machine learning based approaches with wet-lab analyses with the goal of developing interventions for age-associated diseases and perhaps aging itself. Dr. Scheibye-Knudsen is Chief Editor, Frontiers in Aging, and an Advisory Board Member of the Longevity Vision Fund and Molecule Protocol.