Elizabeth Blackburn won the 2009 Nobel Prize in Physiology or Medicine for her discovery of telomerase. In 1980 Blackburn met Szostak, who was also studying telomeres and who was intrigued by Blackburn’s research. The two began a collaborative effort to understand telomere function. In 1993 she earned the additional title of chair of the department of microbiology and immunology at UCSF. Blackburn’s later research involved further investigation of the genetic composition and cellular functions of telomeres and telomerase, as well as studies on the interactions of these cellular components and their roles in cancer and aging. Blackburn published a number of scientific papers and received a variety of honorary degrees and awards, including the Gairdner Foundation International Award (1998; shared with Greider), the Lewis S. Rosenstiel Award for Distinguished Work in Basic Medical Science (1999; shared with Greider), and the Albert Lasker Basic Medical Research Award (2006; shared with Greider and Szostak). Blackburn also was elected a fellow of the Royal Society of London (1992) and a Foreign Associate of the National Academy of Sciences . Elizabeth Blackburn argues that #science communication should show that the value of truth is what brings value to people in general. 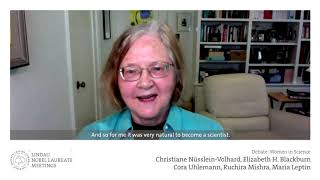 During the #LINOSD debate on women in science, #NobelLaureate Elizabeth Blackburn (@UCSF) talked about how growing up in Tasmania and Marie Curia as a role model motivated her to become a scientist. From 28 June – 1 July the scientific world gathered for the Online Science Days 2020 of the Lindau Nobel Laureate Meetings. Normally, the two meetings planned for 2020 would have been held in Lindau, and Germany would have had the pleasure of welcoming hundreds of the world’s best young scientists as well as many Nobel Laureates. This year, we gathered online instead, for a digital exchange between different generations, cultures, and disciplines.