Sandro Galea, a physician, epidemiologist, and author, is dean and Robert A. Knox Professor at Boston University School of Public Health. He previously held academic and leadership positions at Columbia University, the University of Michigan, and the New York Academy of Medicine. He has published extensively in the peer-reviewed literature, and is a regular contributor to a range of public media, about the social causes of health, mental health, and the consequences of trauma. He has been listed as one of the most widely cited scholars in the social sciences. He is past chair of the board of the Association of Schools and Programs of Public Health and past president of the Society for Epidemiologic Research and of the Interdisciplinary Association for Population Health Science. He is an elected member of the National Academy of Medicine. Galea has received several lifetime achievement awards. Galea holds a medical degree from the University of Toronto, graduate degrees from Harvard University and Columbia University, and an honorary doctorate from the University of Glasgow. 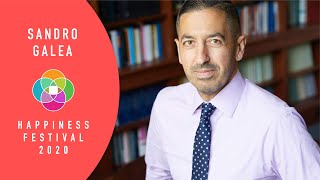 Resilience In A Time Of COVID | Prof. Sandro Galea

COVID-19 represents a near ubiquitous traumatic event that will have substantial impact on mental health of populations. Sandro talks about what makes us resilient in these times and how we can quickly bounce back from stressors Twitter - https://twitter.com/sandrogalea Instagram - https://www.instagram.com/sandro_galea/ Facebook - https://www.facebook.com/galea.sandro/ This talk is part of the Happiness Festival, a weekend of virtual talks and live workshops from July 24-26 focused on reimagine how we can integrate happiness into our future economic systems, societies and everyday lives. It is organised by the newly founded Happiness Institute, based out of the University of Oxford, and is raising donations in support of the WHO COVID-19 Relief Fund.

Vaccines can give older adults their liv...

By Sandro GaleaContributorWed., March 24, 2021 As a Canadian working in American public health, I have long bee...